Announced yesterday, Twitter.com will now have a new and improved look and functionality. Personally, I’m excited about this rollout as it really steps up the web interface experience. You will now have a two-pane view, with @mentions, retweets, searches, and lists on the left side of your screen. Whereas, the right side will now include media, favorites, trending topics, who recently followed you and whom you recently followed. 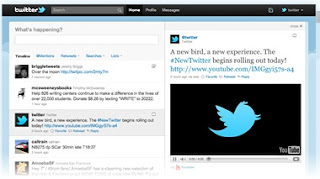 What is one of the neatest features unveiled about the new web interface? The fact that the new Twitter.com has a much bigger focus on the display of media-rich content. Twitter has partnered with USTREAM, Flickr and YouTube to name a few. Essentially, this content will be displayed for you right in the middle of your Twitter timeline. It seems as though Twitter is seriously attempting to take on the desktop clients now.

For those of you who use Twitter for your brand or business, this gives you even more incentive to produce media-rich content for your customers and followers. Evan Williams, Twitter CEO, stated yesterday, “Twitter.com has always been the most popular Twitter client. 78% of active users have used it in the last 30 days.” Check out the Twitter website to learn more about the new features and rollout dates.

Are you excited to use the new and improved Twitter.com? Does this entice you to use the Twitter.com platform rather than a desktop client?