Even Worse News for Google +1 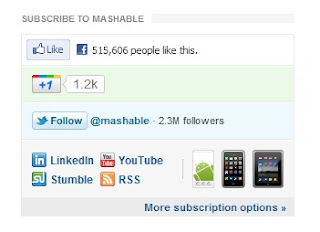 Originally my weekly commentary was going to be on an article that I found on Mashable about how Klout now has a +K button. Similar to Facebook’s Like or to a lesser extent Google’s +1 the +K is going to be given to users who have influenced a reader on a particular topic. Peter Shankman brought this up in his speech during the SFIMA conference a few weeks ago which you can read about here.

When I was looking at the article though, I noticed how many Facebook Likes there was compared to Google +1’s. It’s almost a 500 to 1 difference. This reminded me of an interview that Google ex-CEO Eric Schmidt conducted at the recent D9: All Things Digital conference where he largely admitted he missed the boat on Facebook and Social Media.

How does the 800 Pound Googlerilla (credit: Jay Berkowitz for coming up with the term) think about having now having another 800 pound gorilla (Facebook) in the room? They typically don’t like to be 2nd in anything but as far as overtaking Facebook goes I think that ship has already sailed.