Posted at 12:54h in All Articles by Matt the Intern 0 Comments
0 Likes
Share

Many of us have tried to make something go viral on the web. I for one have attempted to do this with articles, images, Facebook pages, and YouTube videos without much success. I take that back, I did have some success with one of my Facebook pages that I created, “Hey BP Oil, Thanks For The Oil Spill Aholes ”. Facebook recently added a new feature called “Facebook Questions” and in my opinion, created the single easiest way to make something go viral.

I came across a question on Facebook the other day and a light bulb went off in my head. The question wasn’t asked by a brand or a company but by an individual who was simply asking a question. In a little over two weeks, 2,227,424 votes had been cast and over 66,927 people were following the question. Can you imagine if your company or brand would have asked this question? The question went viral almost instantly. 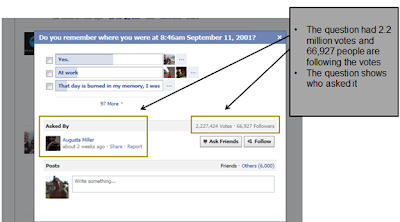 I understand the question, “Do you remember where you were at 8:46am September 11, 2001?”, would be a no brainer for a ton of votes. But just think about this, there are thousands of other questions that could be asked which could produce similar results. By following breaking news and current events and then introducing the questions into Facebook, you have an incredible chance for your questions to go viral. What are you waiting for? Start asking questions today…