Google ‘In Quotes’ and the Presidential Election

I recently found out about Google ‘In Quotes’ and I think it’s a pretty interesting tool. Google grabs quotes from stories that are linked from Google News. These quotations are valuable in understanding where people in the news stand on various issues. If you go to the site, you will see quotes that Barack Obama and John McCain said about issues such as marriage, Iraq, the economy and the environment. I think it’s pretty cool how you can compare their views in an easy format, and in the same place. For a person who isn’t a heavy follower in politics but wants to know what’s going on, this is a good place to go. You can also read quotes from Sarah Palin and Joe Biden, as well as other popular political figures.

Google ‘In Quotes’ has other editions – Canada, UK and India, which allow you to read about the political figures in each country. 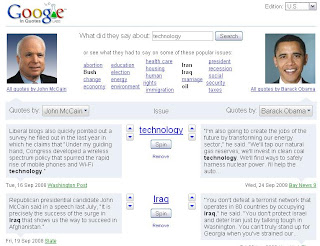