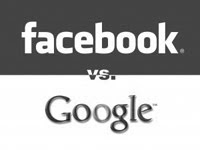 The Internet is a buzz with a possible contender for Facebook. The 500,000,000 member social media empire is starting to hear footsteps and I for one am grabbing a front row seat for the fight.

Can Google even compete with Facebook? There first attempt at social media started with a huge buzz and then fizzled. I really wanted Buzz to hook me like Facebook did but after a couple of weeks I was bored. Will Google’s next attempt at social media be any better? If I was Google and I’m not, I would duplicate Facebook as close as possible. One of Facebook’s biggest problems has been privacy and Google is no stranger to privacy issues either. But if Google can hit the ground running and offer better privacy to their users then Facebook could lose some of its market.

I’m pulling for you Google, there needs to be more than one empire in the social media circle. At the very least, the competition between Google and Facebook will create new advances in social media which we haven’t even been able to dream up yet.