How Competitive is Your Site?

So this morning I open Mozilla Firefox, as I do every morning when I boot up. Well, today I noticed something new in the browser – a ranking metric called “Compete.” 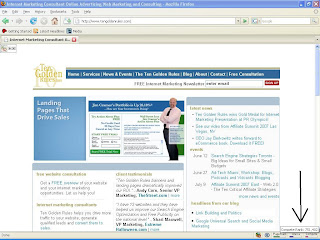 The “compete” ranking has been added to SearchStatus – an add-on to Firefox that shows
Google PageRank, Alexa Rank, and now Compete.com Ranking.

Here’s a better view of SearchStatus:

TenGoldenRules.com has a Compete Rank of 751,402 – great! But what does that mean? After doing some research, here is what I found out about compete.com:

Launched in 2000 Compete.com organizes the clicks we all make on the web. The vision is simple: if we all share our clicks, then each of us gets smarter by knowing what’s happening across the web. Through click-sharing, Compete extends search algorithms by tapping the collective online experiences of millions of people.

Right now Compete estimates site traffic and engagement metrics based on the daily browsing activity of over 2,000,000 U.S. Internet users. So who are the top three competing sites on the internet according to Compete.com?

These results shouldn’t be surprising to any of us and I don’t think they will change very much, if at all.

So, does anyone have insight to share about this new ranking metric? And how do you feel about click-sharing?