This week, a bunch of Facebook news has made the rounds. Just incase you’re not aware, here is what the buzz is regarding Facebook.

Facebook acquired Friendfeed which will only make for a better Facebook feed in the future. Since Friendfeed is mainly a site where users can share all their social media profiles in one place, I’m sure its team up with Facebook can only mean bigger and better things.

Facebook has decided to launch Facebook Lite, which is a lighter version of Facebook, which has been said that it kind of looks like a Facebook version of a Twitter stream. From what I’ve seen, Facebook lite reminds me of an interface that is more mobile friendly, but right now, its being tested on a limited amount of users.

Facebook launches a real time search feature on their website. This new search function even comes up with results from the web, powered by Bing. Now you can search for a company, and view web results outside of Facebook, as well as within Facebook. It was also mentioned that status updates will have the ability to be found publicly and not just if a user is signed into Facebook, which I found to be interesting. This would mean that Facebook search would be in competition with Twitter search. 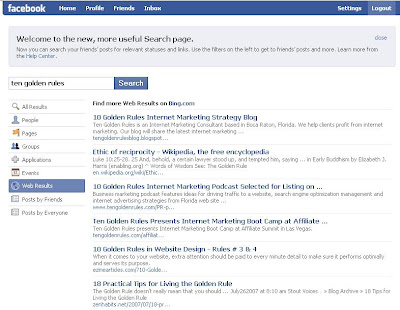