With the power of link building and key words it is possible to play tricks with rankings. This is an unfortunate use of the tools we use to reach so many but with free time people come up with the oddest things. In 2004 if you looked up Google and Yahoo and looked up waffles you would have found John Kerry as the number one choice. Even now on yahoo he is still number 4. 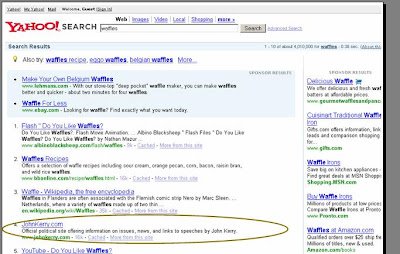 Also called ‘Google bombs’, we’re sure it is only a matter of weeks before the 2008 political contenders get into the mud and try and use SEO Link tactics as a tool to discredit their opponents. It is not what it was meant for and nor should it be used in this way. A couple other examples include “miserable failure” and “french military victories” All would show amusing twists that in fact are proof of twisting a system of neutral information for a personal attack. With the most hotly contested presidential election on the line it would be wise to expect every trick in the book to be used.