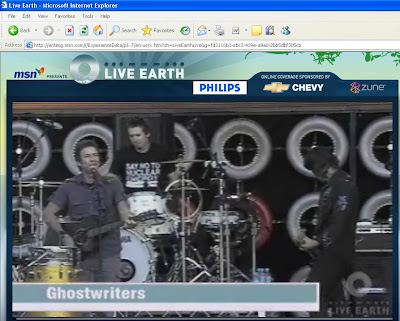 Watching Live Earth from Australia on MSN, totally cool. The pictures are really clear, streaming audio hasn’t had a blip in over 20 minutes.

I fondly remember Live Aid with the satellite feed breaking up (especially U2’s breakthrough moment with playing ‘One’), and Live Eight last year with so-so video, it looks like ‘live’ has arrived! 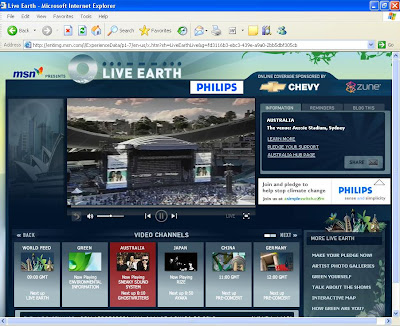 Phillips had a well placed ad for their earth friendly light bulbs and Chevy is sponsoring the ‘free’ video feed – thanks Detroit!

I believe in recycling, reducing and re-using. I don’t like big oil and its political influence. But before I place myself too far in the “The Earth is Melting” crowd, I’d like you to consider the theories of Dr. Tim Ball “The Myth of Global Warming?”, who does not think that Global Warming is nearly as serious as Al Gore (who invented this very internet I that gives me this soapbox 🙂 ). Easily the best professor I have ever had Dr. Ball used to engage us with a world weather introduction to each class that was as entertaining as Johnny Carson or Jay Leno. If Dr. Ball is skeptical , this deserves significant air time. He is brilliant and what he says is, in my experience and opinion unquestionably worthy. From his interview:

“…all predictions of future warming are based on computer models that don’t work. They can’t forecast one year from now so how would they be able to forecast 100 years from now? In addition, all forecasts made by the models to date have been wrong. The other major weakness the assumption that an increase in CO2 from human activity will result in warming. The evidence shows that CO2 does not correlate with temperature change. Even more damaging is that the 420,000 year ice core record shows the complete opposite with temperature changing before CO2 not as hypothesized. The models all assume a doubling of CO2 will occur. They are all programmed to have temperature increase if CO2 increases and they are unable to include feedback mechanisms. For example, an increase in temperature will result in an increase in evaporation that will cause an increase in cloud that will block the sun and cause cooling”

“Gore’s movie is pure propaganda someone said to me it is the Da Vinci code of climate change. If you can arrange it I would like an hour on Larry King alone to go through each part of Gore’s movie and show the errors and distortion. Of course, it won’t happen.”