LivingSocial is Differentiating Itself Away from Groupon

About one month ago, I blogged about Groupon. The ‘deal of the day’ and group-buying phenomenon is branching to Google, which is currently testing Google Offers. In December, Amazon invested $175 into LivingSocial, bringing it’s current platform to “rapid global expansion” (Mashable). Clearly, the ‘deal of the day’ fad isn’t just a fad. It’s proving to be a social media, email marketing, and crowd-sourcing savings powerhouse. At an average open rate of 66%, that is an effective email (screenwerk.com)!

Enter LivingSocial. As LivingSocial is quite similar to Groupon, it has differentiated itself by offering LivingSocial Escapes. Back in October, LivingSocial acquired Urban Escapes, a social adventure company that provided group excursions and travel packages. This is a smart move for LivingSocial, which was more or less offering the ‘deal of the day’ to local restaurants, spas, sporting events at a 50-70% discount.

LivingSocial Escapes offers vacation deals, and truly original ‘escapes’, at a deep discount. Take an adventure to Quintana Roo, Mexico for example. I get a eye-pleasing, enticing deal straight to my inbox that is half off the original price ($1,540) for a five-night stay. If I want to bring a guest, it’s only $205 more. Now that’s a deal. 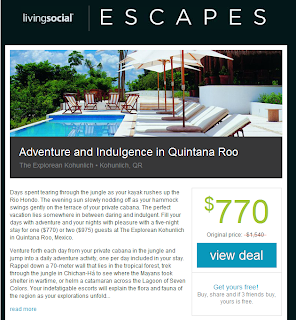 Buyers have one week to decide, in comparison to the daily deals that expire the next day. Have you purchased a LivingSocial Escapes vacation? If so, let us know about your experience!