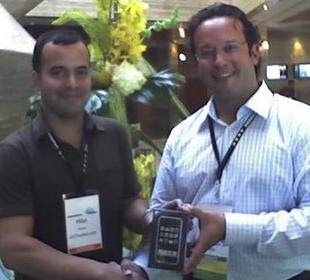 Mike Boudet, of GoTrusted, just figured he’d drop his business card in the box and see what happens. Just like anyone else, he never thought he’d win. But, he did!
At 3:30 on Tuesday, July 11, our booth at the Affiliate Summit East got very crowded as many gathered to watch our drawing for the free iPhone. As Jay Berkowitz, CEO of Ten Golden Rules, reached in to draw the winning entry – there was definitely some anticipation and excitement in the air. Since Mike was not present for the drawing, Jay immediately called and left a message to let him know he was our winner. We got in touch later and were able to make the presentation before the show ended.
Congratulations to Mike. The iPhone was definitely in demand. Not sure how we’re going to top that at the next show – but we’ll try!
Share This