As reported in Ad Age May 14, 2007 (see below) Bill Gates “predicted the Yellow Pages are headed for extinction.” 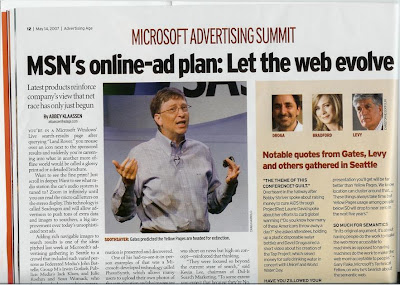 A number of top blogs also covered this story:

In a Q & A last week with Joanne Bradford, Microsoft Corporate Vice President and Chief Media Officer, at the Microsoft Strategic Account Summit 2007, Gates projected a short life span for the Yellow Pages.

“Well, the Yellow Pages are going to be used less and less. We should be able, when you go to the service that’s going to take our technology and the Tellme technology that we acquired, when you ay something like plumber, the presentation you’ll get will be far better than what you get in the Yellow Pages. After all, we know your location, and so we can cluster around that. We can take the information and show you the names, and then you can expand the information easily.”

The Chris Silver Smith on NaturalSearchBlog

“Last week at the Microsoft Strategic Account Summit 2007, Bill Gates interacted with Microsoft’s Corporate VP and Chief Media Officer, Joanne Bradford in an interview/Q&A session, and he predicted that among those under 50, yellow pages usage would drop down to zero within five years!”

David A. Utter on WebProNews.com

And Benjamin J. Romano in the Seattle Times

“The traditional Yellow Pages are doomed as voice-activated Internet searches combined with on-screen interfaces on smart mobile devices get better and proliferate, Gates said. The company’s recent acquisition of voice-technology provider TellMe is accelerating the trend.”

What do you think? Do you agree with Mr. Gates and Mr. Berkowitz?