So there are millions of people that are on Twitter and people have said everything from where they are, to exactly what they are doing. Here are five “tweets” I found to be some of the most interesting so far.

2. The fact that the cat @Sockington has over 1.5 million followers!

3. How Twitter helped save someone’s life thanks to @mrskutcher.

4. How breaking news hits Twitter before the media is able to report on it. For instance, when @jkrums sent a picture of the US Air flight landed in the Hudson River. 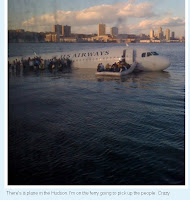