Hey everyone, it’s Matt the Intern. A new app came out called Periscope, and I’m going to give you a rundown on what it is. 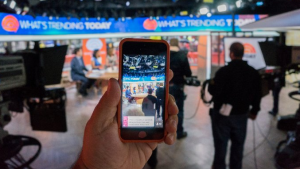 Periscope is a video streaming app where you can broadcast whatever you want to the whole world. All you need is a smartphone and internet connection, and you will be able to stream whatever you are doing live to the whole world.
Both Periscope and, it’s rival, Meerkat came to prominence at South by Southwest festival in Austin Texas this past spring.
Twitter clearly valued the app by buying it for just less than 100 million dollars cash.
Here’s an article about it:
www.wsj.com
The 3 current most loved Periscopes:

All three of these Scopers have been love tapped over 50 million times! In this case, a ‘love tap’ is when a viewer taps the screen while the broadcast is playing. As they tap the screen a heart flies up from the bottom right corner.
When a Scoper starts to broadcast, his/her followers will be notified on their smartphone.
This app looks like it has a bright future.
Go download it now!