Return of the… BlackBerry? 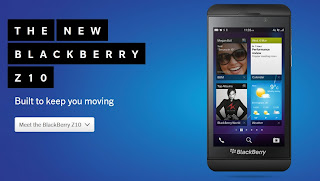 The BlackBerry Z10 was introduced earlier this week by BlackBerry (formerly Research In Motion (RIM).) Some diehard BB relics are jumping for joy, but will it last? BlackBerry is not only very late to the SmartPhone game, but it’s newest incarnation is apparently not very intuitive, especially since iPhone and Android users are already versed in using their phones a certain way. When a handful of seemingly tech-savvy Mashable interns and editors get their hands on the new tool, their first attempts at using it are less than successful, as documented in this short video.
The phone itself is purportedly powerful for organization and messaging, which had always been BB’s strength. The negatives appear to be the learning curve and new operating system as well as its lack of apps. I’m sure developers are already programming their software to work with BlackBerry, but new users will have to have patience – not something America is known for.  In Pete Pachal’s in-depth BlackBerry Z10 review, he suggests that the real battle for relevance will take place overseas where SmartPhone penetration is still relatively low.
Right now, this phone may only appeal to people who were huge BB fans or the very early adopters who just want something new. Are you planning to buy a BlackBerry Z10 or wait for the platform to mature a little first and see how it goes? Let us know in the comments below.
Share This