Second Life in the Mainstream 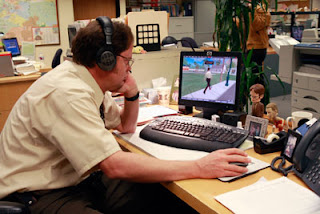 Last night on “The Office”, Dwight was featured spending time in “Second Life” – complete with headphones and microphone. They showed his avatar flying around, along with Jim’s “stealth” avatar (created, he explained, ONLY to follow Dwight around). The joke was that Dwight’s avatar was actually still named Dwight and still sold paper for a job – but that was because, as Dwight put it, “My first life was so awesome, that I wanted to create a second life just like it…”

Second Life was also featured on CSI recently (although not in true “in-world” form), and apparently will appear again as part of that show.

I’m very happy to see Second Life breaking through in popular media like TV. Perhaps Second Life is not yet doomed as many currently predict.