The Mystery of Hashtags Revealed

I’ve been asked a lot lately about hashtags, so I thought I’d put together a brief tutorial for those of you out there scratching your heads at the phenomenon of adding a pound symbol (#) in front of a word or phrase. What does it mean and why should you care?
The hashtag first became used in popular culture on Twitter as a way for users to categorize or group messages together and as a way for their tweets to be found more easily in Twitter search results. To create a hashtag, simply add the pound symbol (#) before a key word or phrase that you want to highlight. For example, if you are a retailer and you’re having a big sale on shoes, you might use #ShoeSale in your tweet to help get found by anybody looking for a shoe sale. (The capital letters don’t have an effect on search, but it makes the words easier to read). As Jeff Bullas points out in his blog, “hashtags are like Twitter SEO.” 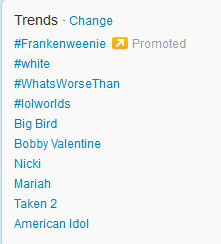 At the same time, you can find other people who are talking about your product or industry by doing a hashtag search of your own. You would simply type your keywords into the search bar to find anyone who is talking about #shoes and join the conversation. Many events and conventions designate a hashtag that attendees can use to find other Twitter users who are attending the same event, and people who cannot attend may still follow along what is happening by following the hashtag. Televised events now have hashtags that are broadcast to viewers so everyone can be part of the same conversation, such as the Democratic National Convention (#DNC2012) and Republican National Convention (#RNC2012).  If you do a search in Twitter for these hashtags, a list of tweets showing these topics will come up. Often, hashtagged words that are very popular become Trending Topics.
Hashtags are not just limited to Twitter anymore. Other social media platforms, such as Pinterestand Instagram, have also picked up on using hashtags as a way for users to categorize their content and to make searches easier – both to find what they’re looking for and for others to find them. How are you using hashtags for your business? Have you had success in creating your own trending hashtag? Tell us about it in the comments below.
Share This