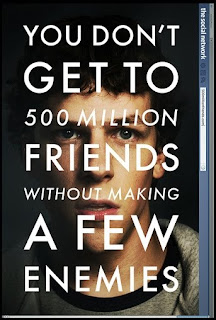 A couple years ago we first heard of the possibly of a “Facebook Movie.” But it is official now– the first poster for the movie has been unveiled by Columbia Pictures. Scheduled to premiere in October, The Social Network explains the history of Facebook from beginning in a Harvard dorm through to its world domination.

One thing that will really stick out to you from the poster is a portion of the tag line. 500 million. Facebook has not officially confirmed this number yet despite it being included on the poster. Is this currently accurate or just playing off the assumption Facebook will be well beyond this number by the time the movie debuts?

What do you think about the concept of the movie? Although it may seem silly at first, I’m looking forward to watching the movie. There is no denying Facebook has developed into a phenomenon throughout the world. Although many social networks rise and fall, I think it is safe to say Facebook is not just a fad.