To Groupon or Not to Groupon, That Is the Question

Many merchants are contemplating whether to take the dive and offer a “deal of the day” on Groupon. There has been talk lately on whether Groupon is valuable (price and service wise) for merchants to post deep discounts on their services and not know how many penny-pinching Americans will buy that deal.
The lure of Groupon is two-fold: it helps businesses gain new customers and it is the ‘guilty pleasure’ email that consumers like to open daily. I know I get surprised every morning when a different restaurant offers an enticing meal at a very low price–40 or 50 percent off the original mark-up. It is the largest daily deal site and, according to Forbes, is the fastest growing company ever. People enjoy the social media aspect of Groupon by sharing the deals with their friends and colleagues on Twitter, Facebook, and by email. The question lies–is it feasible and profit-worthy for a business to offer their “deal of the day” on Groupon?
Let’s take a look at the numbers. First off, Groupon has a lot of power. With more than 23 million total US subscribers in over 150 US cities and 22 countries, Groupon reaches a lot of deal hungry people. Groupon not only offers steep discounts on spa services, hotel stays, and outdoor adventures; but also keeps part of the revenue raised by these coupons. In 2011, Groupon’s sales may reach more than $500 million. If that’s not enough, their witty copy and call to action to buy now entices users to click the purchase button. 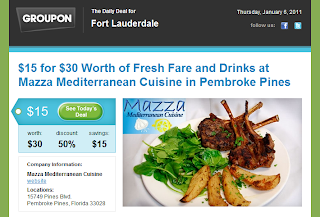 Groupon Founder Andrew Mason has struck gold with this easy-to-use platform.
There has been some flack from companies using the Groupon platform. Most, though, are user error when the merchant did not staff enough employees to handle the influx of coupon purchases. Want to know the good, bad, and the ugly of Groupon? Go to the source at grouponworks.com.
What’s next for Groupon? Groupon Stores and the Deal Feed! See more here.
How has your experience been with Groupon? Share it in the comments here!
Share This