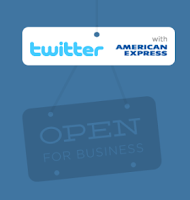 Are you looking for a new advertising tactic to test for your business? Twitter might just be the answer…

Beginning in late March, Twitter will roll out new self-serve advertising products, available to businesses of all sizes, called Promoted Tweets and Promoted Accounts. This is all in an effort to continue building out some form of a revenue model for the business, which they have appeared to struggle with. According to a report by eMarketer Digital Intelligence, Twitter’s ad revenue growth will fall from the triple digits last year to “mere” 83% growth in 2012, reaching nearly $260 million worldwide by the end of this year. I still think Twitter is a viable platform for some businesses, and depending on the cost of this advertising, it may very well be worth the test.

Starting today [February 17th], American Express Cardmembers and merchants can register to participate in the initial introduction of this new offering via ads.twitter.com/amex.

We will launch this new offering more widely later this year.

Does this form of advertising make sense for your business? Please describe your Twitter business success stories below in the comments.