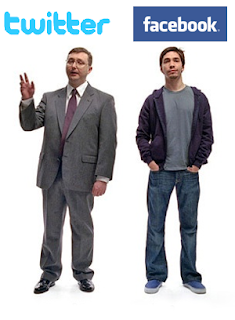 With the recent increase in the popularity of Twitter and with everyone from Barack Obama to Britney Spears signing up, it leads us to question how popular Twitter actually is.
20% of Twitter users have joined in the last 60 days and Twitter is expected to double its members within a year. However, just how far does Twitter lag behind Facebook in popularity?
The media mentions Facebook about 4 times as often as Twitter, but Facebook is over 30 times bigger than Twitter and it is growing much faster.
Twitter has 4-5 million users with 5-10 thousand new accounts opening per day. This seems huge, but the reality is that 30% of Twitter’s 5 million users have unengaged accounts.
Compare this to Facebook’s 140 million active users and 600,000 daily registrants. It seems clear that Twitter is a huge phenomenon, but that Facebook has already broken into the mainstream.
If Facebook stopped growing today and Twitter was allowed to play catch-up, it would take 36 years for Twitter to reach Facebook’s current numbers. Conversely, Facebook “grows a Twitter’s worth” every 8 days!
In order for Twitter to break into the mainstream its members need to start using the social network more. 38% of Twitter’s members have no picture, 22% of members have under 5 followers and 9% aren’t following anyone.
These numbers were taken from a HubSpot report on Twitter’s status at the end of 2008 and from new facebook user numbers.
Share This