Despite some serious signs that the US economy is headed towards a recession, the internet economy is still showing signs of burning up! 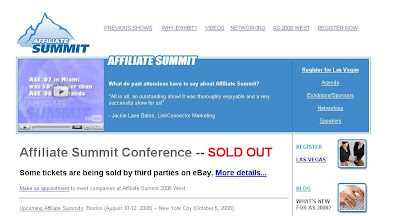 The fantastic Affiliate Summit show coming up next week in Las Vegas announced today that their event passes are sold out and that people are selling passes on eBay. Shawn Collins, one of the event organizers is a former ticket broker himself so he encourages this practice :)The trade show sold out months ago).

Also today, Internet Retailer announced that their booth space was sold out for their show June 9 -12 in Chicago.