This first chart shows my Twitter history, I started on Twitter in March 2007, I really started Tweeting in March 2009. I think this likely coincides with using TweetDeck, a great application for managing who you follow and easily ReTweeting great tweets by others. 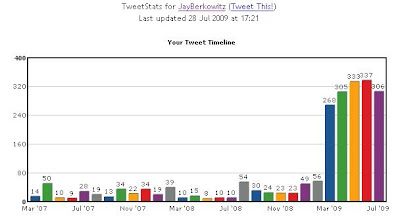 These charts show the day of the week (Wednesday) and the hour I tweet the most (11PM). I’m not sure what this tells us, except that I should probably get to bed earlier.

This final chart shows the Twitter personalities that I have ‘ReTweeted’ the most. Iconic88 is my favorite ReTweet, he is is an amazing, positive uplifting twitterer. I love to spread his positive messages. I even interviewed him on a recent Ten Golden Rules Internet Marketing Podcast . Some other great folks to follow include Mashable (from the leading blog), Facebook Goddess Mari Smith and Help A Reporter founder Peter Shankman’s @Skydiver handle. 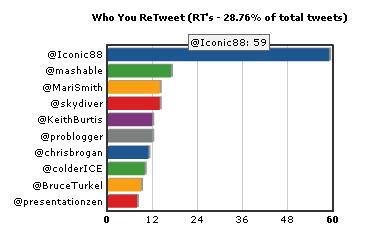