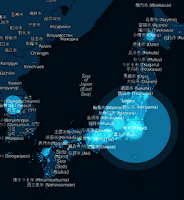 It’s a new year, bringing a lot of new things. New gadgets and gizmos that are gifted from the holidays, new resolutions, and in the social media world – new tweets. I ventured over to blog.twitter.com to see what’s new on Twitter. Low and behold – a Twitter tracker for New Years Eve!

Less than one minute after midnight January 1st in Japan, Twitterers set an all-time record in how many Tweets they sent per second (TPS). There were 6,939 TPS wishing friends a Happy New Year, or “Akemashite omedetou gozaimasu”! That beats the previous TPS record on Twitter, sent during the World Cup Finals in June 2010. According to @JennaDawn, “In fact, on New Year’s Eve, that all-time TPS record was shattered more than 68 separate times within a single 3-minute period. ” That’s insane!

Check out this video visualizing New Year’s Eve Twitter data from all over the world:

“The video above visualizes New Year’s Eve Tweet data across the world. The circles get bigger as more Tweets are being sent at that moment, which means it’s probably midnight in that timezone. Notice that the circle over Tokyo gets so big it nearly swallows Japan.
Needless to say, we‘re looking forward to seeing what the Year of the Rabbit has in store. And, we’re humbled by moments like this that show how people around the world are connecting and celebrating on Twitter.”

What’s next from Twitter? A desktop application for Mac, of course!