Getting News Through the Twittersphere

Twitter has grown so much, and everyday more and more people are tweeting. For many internet marketers and social media junkies, Twitter has become a part of our daily lives, next to email and listening to music on Pandora or Slacker Radio. When you are using Twitter and checking it multiple times a day, you become accustomed to what is happening in the Twitter world. In fact, Twitter has already proven that they can be ahead of mainstream media, since once a tweet is sent, it is seen instantly.

A while back I wrote about Ivy Bean a while back, who was the oldest Twitter user. I found out that she had passed away today. As @IvyBean104, she was just another Twitter user, using it as she found useful. She was a popular user, with 56,000 followers and was fairly active. It just comes to show that anyone can use social media, even if you’re over 100 years old. Amazing, I think.

Hated by many, liked by many (including myself – I can’t help that I think his beats are dope) Kanye West is now part of the Twittersphere as @KanyeWest. His first tweet caused some attention (of course) – 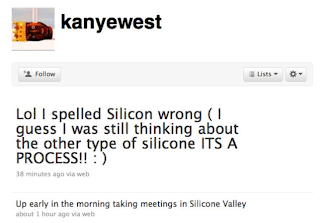 Perhaps his visit to Silicon Valley made him create a Twitter account? He was also there to meet with technology companies and also performed at Facebook headquarters.