Talk around the office lately has centered on the fierce rivalry for the number one social networking site. Incumbent Facebook is holding on strong so far with no sign of stopping. Heavyweight Google+ would like to think they’re in 2ndplace, but a recent revelation throws doubt on their self-proclaimed title. On Tuesday, an article in the Wall Street Journal cited a study by comScore, Inc. that put comeback kid MySpaceahead of Google + in terms of the amount of time spent on the site. Users also spent more time on other favorite social networking sites like Twitter, LinkedIn, Tumblr, and even newcomer Pinterest than on Google+. 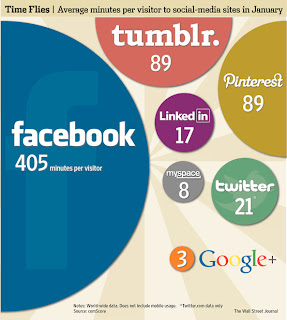 The biggest mistake seems to be the search giant’s assumption that people wanted another social networking site similar to Facebook. There is not enough incentive to switch and not enough time in the day to invest in yet another social site – especially when people are spending six to seven hours a month on Facebook versus a reported 3 minutes on G+. With all the money that Google has been spending on mass media to boost the social network’s popularity and practically building their entire strategy around it, will Google survive a failure of this magnitude?
How much time do you spend on social networking? Which is your preferred site? Tell us your thoughts in the comments section below.
Share This