February 15, 2012
Jay
Social Media
Apparently MySpace is back and – much like Montezuma’s Revenge – it’s back with a vengeance. I read an articletoday that MySpace has gained a million users since December thanks to a new music player. Really?? Who are these “million users” and what’s so special about this music player that it would stand a chance against Pandora or favored U.S. newcomer Spotify?
I decided to head on over to MySpace.com to check it out. I reached into the depths of my brain to remember my login information. I waited, holding my breath as the circle spun, and… nothing had changed. My last status update from 2009 was still there along with the same frenetic layout. There are links to Music, Video and Games sections on the top right navigation and the home page definitely sells the music aspect. Of course, it looks like it’s selling mostly to teens who crave pop music with front page features on the likes of Taylor Swift, Breaking Dawn Part 2 (hey, isn’t that a movie?) and Boy Bands (who are apparently also making a comeback.)
The only redeeming quality of this “new & improved” MySpace is that music videos, which have been unceremoniously shoved out of the limelight thanks to MTV’s programming geniuses, might get a comeback of their own. Other selling points are the integration with Facebook (the MySpace app works within Facebook and users can log in with their Facebook credentials) and the fact that the new music player offers free access to 42 million songs vs. Spotify’s measly 15 million songs. The question is, with the ability to upload your original music, how many of those 42 million songs are quality recordings and how many were made in your brother’s basement?
Will you be checking out the new MySpace for its musical enhancements? Head on over to www.MySpace.comand tell us what you think! (Just don’t hurt yourself trying to remember your old password.) 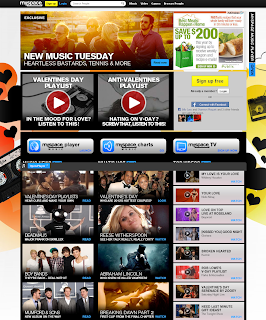 The new MySpace home page focuses on music, videos and pop news, seemingly for the teen in all of us
Share This