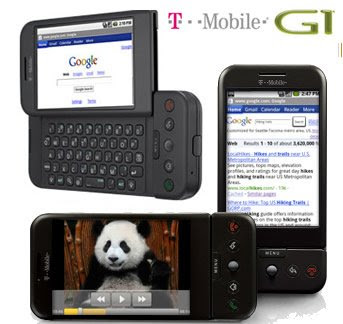 The T-Mobile G1 with Google is the first commercially available phone to run on the ‘Android’ operating system, which empowers developers with tools to create and offer consumers applications that add value to their lives. This is one of many initiatives T-Mobile is working on to lead the industry in bringing real innovation to wireless customers.

The G1 starts out looking like a somewhat chunky (4.6″ x 2.1″ x .62″) PDA-phone, topped by a big 320×480 touch screen. The touch screen is wonderfully quick and responsive. Below the screen are five buttons and a small, slightly slippery track ball. Slide the screen to the right and turn the device 90 degrees, though, and it reveals a full QWERTY keyboard of slightly rubbery, nicely separated keys. There’s a miniUSB charging port on the bottom, and a MicroSD memory card slips into a difficult-to-open slot to the right of the keyboard. (The phone comes with a 1GB card.) On the back, there’s a 3-megapixel still camera.The G1 works on T-Mobile’s 3G network, on foreign 3G networks, and on GSM EDGE networks all over the world, including in the US.

The G1 also has Wi-Fi, though you can’t use it for phone calls. We got 600-700 kbps on a speed test Web site using T-Mobile’s 3G connection, which is a decent speed. You won’t be able to use the G1 as a 3G modem for your PC, T-Mobile execs said at the G1’s launch.