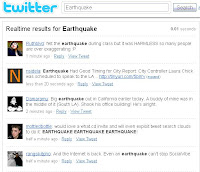 If you follow enough people on Twitter, you’ll definitely learn about what happens in the news. CNN is one of those sites that I barely have open in my browser, but you’ll find my Twitter page open. In a matter of moments, my Twitter feed was full of tweets like “Earthquake!” and “OMG, EARTHQUAKE!” and as I opened CNN.com, it was breaking news. Moments later, the keyword “Earthquake” made the front page of Twitter Search as a trending topic. As soon as an event such as an earthquake happens, it reaches masses quicker than the Associated Press. Comes to show how useful Twitter is as a personal newswire.

Can you imagine all those California twitter people under a table or standing in between a wall sending tweets?!