With more and more people watching videos, think about including video’s into your press release. According to a new study that was published by Pew Research Center’s Internet & American Life Project, “the share of online adults who watch videos on video-sharing sites has nearly doubled since 2006. Fully 62% of adult internet users have watched video on these sites, up from just 33% who reported this in December 2006.” Many press release service allow you to embed the video into the release. You can upload the video file itself or embed a link from a YouTube channel. With today’s press releases, you should be offering your reader the news they want, how they want to read or watch it. 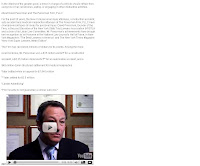